Anna Reumert is a PhD Candidate in Anthropology at Columbia University, where she teaches Anthropology and Gender and Sexuality Studies. Informed by ethnographic fieldwork in Lebanon and Sudan, her research examines gendered migration, racialized labor and transnational political organizing connecting East Africa and Beirut. Her work has been published in Mashriq&Mahjar, Jadaliyya, MERIP, Ajam Media Collective and Warscapes. She divides her time between Brooklyn and Beirut. 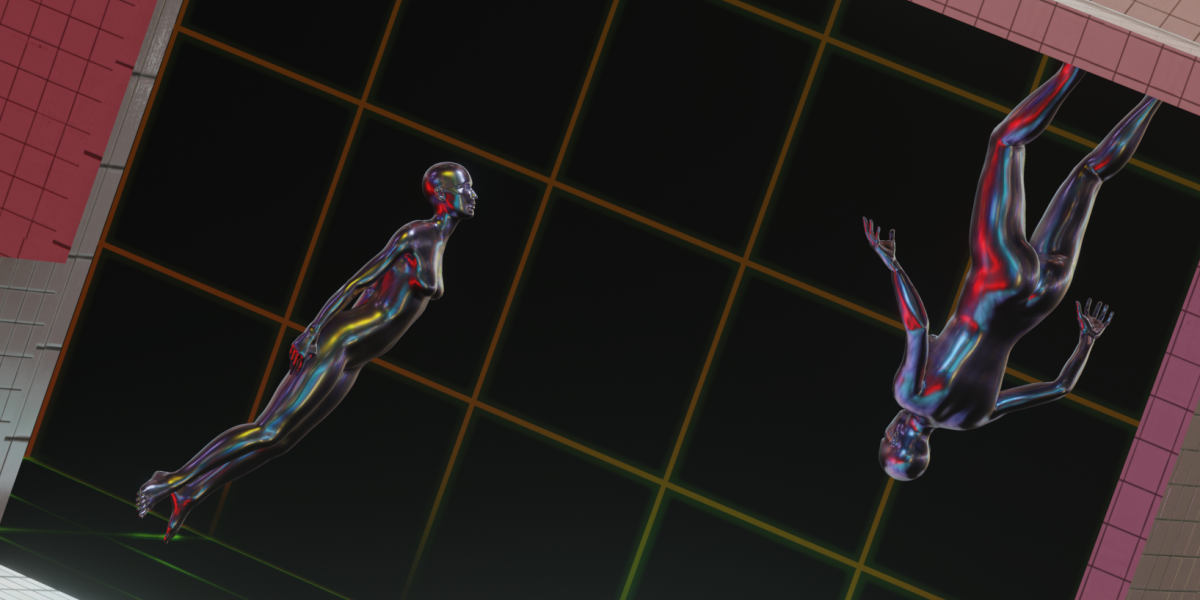 I thought I was going to spend this flight thinking of you, of why I’m leaving, but I’m finding it hard to think of you at all, just as I found it hard to think of anything to say to you before I left. Instead I’m thinking about the first time I was on an airplane. What comes to mind is the image of my mother sneaking the silver cutlery into her handbag. Back in the 1990s, airplanes had not yet become war zones against terror, and Scandivanian Airlines served silver cutlery with the meal. The cutlery had my uncle’s name on it because he had designed it, so my mother was less stealing than retrieving what the airlines had made into property. My uncle Bo belonged to the generation of artists who complained that younger artists don’t know how to draw. You had to give it to him when you saw his work. When he stayed at the Chelsea Hotel in the late 1960s, he bargained his sketches as payment for the room, after three months of wasted talent on booze. He wasted more than that. In my childhood, he was always naked, covered only by a robe, sitting at his drawing board, pen at hand, steady even as the other hand held a glass of whiskey – mixed with water because it was 10am –, and humming to the tunes of the jazz records that his dad had composed. I have a recurrent dream of him sitting on his drawing chair in the middle of a traffic jam in Manhattan, winking at me as if to reassure me of what I already believed: That he would outlive us all.

In his waking life, my uncle did not live up to this promise. A decade after his cutlery became integral to the Nordic travel experience, he cut his veins in the bathroom, sick of the Kol in his lungs and the break in his heart from losing his wife, my mother’s sister, a few years earlier. It took him 16 hours to die from blood loss. He had to keep the wound moist to let the blood run. My family of doctors were in disbelief. “Why didn’t he just take a pill!” They would have driven him to Switzerland, one cousin offered, where active death help is not a sin, just to be relieved of his pain. My uncle had left us with an impossible request: not to mark his death with a funeral. We obeyed by making his suicide taboo. We rarely speak of him, but the house he built still stands, and my cousin who owns it lets me use it sometimes, which is how you came to sleep there last summer. Perhaps you thought you could disappear unseen, but my uncle had installed lights in the garage that set off the entire terrain by the slightest movement.

My uncle’s lights haunted me, too, the summer he died. I was living in Amman at the time and I would stay awake until the call to prayer came on at 4am, occupied by the image of a crumbling man in the bathtub, too weak to kill himself. Does loss gravitate differently for those who have faith in the afterlife? Would a family of believers have responded differently to my uncle’s act of bad faith? That was what I asked my best friend Lena. We were taking a night walk in the small town we had both left after high school, and to which we had returned only to say goodbye again. Lena, whose dad was dying from cancer, described her pain: “It’s like you’re holding your breath above water while your brain is burning and the only thing you want to do is dive but you don't have enough air to do that since you’ve already been holding your breath for so long.”

We walked along dark suburban roads lit only by the chandeliers reflecting from inside the living rooms where families were cozying up for Christmas, and past the old tennis courts where we once had attempted to lose our virginities. We had been hungry then to grow up and get the fuck out. A familiar feeling, that restlessness, as it turns out. Insatiable I can be, yes, and in particular around you. I am thinking of that morning two years ago, when our bodies woke up entangled in Beirut, shy from swimming in each other’s waters, and still burning for more.

Do you remember that Sunday when we walked down to join the women’s march? All my Lebanese and Ethiopian sisters were there, chanting, and your green eyes were squinting in the early spring light. “Queer is infinite!,” my friends had graffitied on the wall when Beirut was rising up in protest, and it felt like that. We did not know what was happening to us and to our bodies; we could not predict what would happen to the city, but we knew that whatever it was, it would exceed us and our little dramas. In that brief time of raging against vending machines and hugging strangers at the square, anything felt possible. I had your blood in my mouth.

Political theory has taught me endlessly about brotherhood, but it was from the women at the square that I learned the meaning of a sister. A sister is not a friend. She is not here to give me comfort but to teach me, and it is important that I listen and that I learn.

Less than a week later, the world went into lockdown, and that was the end of my first lesson. It had not prepared me for the toxicities at bay.

Those of us who survived the 2,750 tons of ammonium nitrate that exploded our homes and minds on August 4 2020, we stretched the limits of our infinity in the months that followed. The Beirut port explosion divided the city into saints and sinners. The saints were the martyred, buried under the rubble, and the disappeared, who could not be buried. The sinners were the politicians who had their blood on their hands but could not be brought to court. In between them were the survivors, Lebanese and migrants, who swept and rebuilt the city.

We were living through a catastrophe without a guidebook. Friends of mine who had grown up during the civil war in the 1980s said that that time was nothing compared to now. At the American university of Beirut, a professor assigned science fiction to comprehend Lebanon’s present.1 And to imagine a different future. But our imagination was stretched thin. “Ammonium”, the alien material that had shattered through our windows and entered our systems, became a euphemism for all things intrusive and unpleasant. We resorted to fiction to describe our reality.

“We are flying over a ball of fire,” Lila tells Lenu in their parallel world across the Mediterranean sea.2 “The part that has cooled floats on the lava. On that part we construct the buildings, the bridges, and the streets, and every so often the lava comes out of Vesuvius or causes an earthquake that destroys everything. There are microbes everywhere that make us sick and die. There are wars. There is a poverty that makes us all cruel. Every second something might happen that will cause you such suffering that you’ll never have enough tears. And what are you doing?”

And what are we doing to ourselves? They say that the survivor carries a sense of guilt. As the adrenalin of doing something, anything, faded, the collective accusation – What have they done to us? – turned inwards. It was not enough that we were inhaling glass fiber from our torn-off walls and stepping on the glass that paved the streets; we had to consume our bodies with it, too, from plates that were passed around at the houses we frequented. One night I passed out on the bathroom floor and woke up hyper-ventilating, after licking the sink. “It’s normal”, my friends responded with muted alarm. We walked home strung out in each other’s arms and unburdened our anxieties mixed with covid and chlamydia. We were unprotected, but how do you protect yourself when you've already been blown apart? We were reckless with each other and called it community. We tried to kill ourselves and named it our survival. This was our shock therapy. It was all we could do not to fall apart.

We came undone as fast as we had come together. This winter, you and I slept with our backs to each other. I woke up before you and walked in the crisp December sun to the nearest town, just to get away. Better to leave than become the grass you eat. You spent the winter lying in the depression of your body in the forest of your childhood, wondering why you couldn’t have it any different. How could you lie there for so long, in the January frost? Did you not feel a thing or was it rather that you felt too much?

If queer is infinite, what does it mean when we relate and intimate within a structure of limitlessness? What does it do to friendship when infinity becomes our principle of living? Say for instance that you fall in love with a sister; what kin does she become?

“To be queer is to go to bed with your friends and wake up as better friends,” my friend C offered, wiping garlic sauce from her lips; “We should make love to our friends as a way of relating to them, caring for them.” We were coming down from an unruly night at the ballroom club in Beirut, where the distressed bouncer had politely warned us to stop kissing before someone called the police. “Girl meets boy, girl loses boy, girl gets cute girl back,3 but with the added twist that we all go home together,” I responded. C’s vision of a queer friendship had thrown me back to the “freexone” that Janet Jackson summoned for my friends and I in the 1990s, and which became the soundtrack of our girlhood. We did not understand the meaning of what we sang back then, but we grasped its radicalism. The song begins on an airplane, symptomatic of my circuits of thought. Now as I write, I remember how the song ends. In “Xone 3,” Jackson replaces the monogamous straight/gay couple with a command to “love your sister, love yourself.”

In a queer (polyamorous) constellation of love, we do not “get” and “lose” someone; we make kin. This is easier said than done, because families are messy, even the ones we choose for ourselves, and sometimes we lose them to external circumstances. Queer is infinite, but it is not immune to the toxicities of state violence and mass illness that are transmitted around us and that make us sick with desire for things that will hurt us. We can make kin of friends, but we cannot protect them from the world we live in, even as we try to change it. When unnamed forces burn us with teargas and make us radioactive, how do we avoid burning out as a collective? How do we ensure that none of us end up alone on the bathroom floor? Can we?