Raed Rafei is a Lebanese scholar, filmmaker and multimedia journalist. For over ten years, he worked as a Middle East reporter for national and international publications and researcher, producer and director of TV news reports and documentaries for channels like Al-Jazeera, CNN and ARTE. Since 2011, Rafei has been making independent hybrid films that screened at international film festivals and received several awards. His films include: 74 (The Reconstitution of a Struggle) (2012), and Here I am ... Here you are (2016). Rafei is currently based in California where he is pursuing a PhD in Film and Digital Media at the University of California in Santa Cruz. 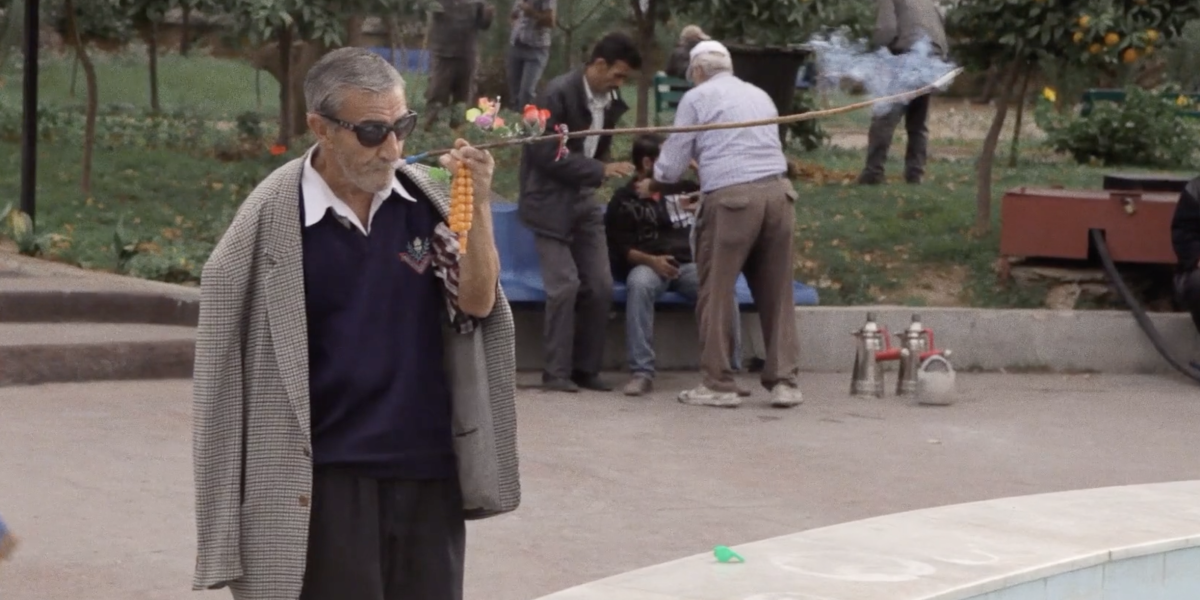 Film still from Queer Utopia: From Stonewall to Tell Garden

When words fail to articulate the meaning of “queerness,” silence is the answer to an impossible coming out. This essay film ponders the place of queer utopia in a world of difference and privilege. The wandering eye of a Lebanese queer filmmaker oscillates between the clamor of gay rights slogans at the Stonewall monument in New York, and the warm ordinariness of a public garden in his hometown, Tripoli, Lebanon, where homosexuality remains illegal and taboo.

In June 2013, The U.S. Supreme Court issued an important ruling for LGBTQ rights.1 By striking down DOMA, or the Defense of Marriage Act, the court paved the stage for federal recognition of same-sex marriages for (finance-related) purposes such as Social Security survivors' benefits, insurance benefits and tax filing but also, most importantly in my eyes, immigration.

When the ruling was announced on the morning of June 26, quite spontaneously, I grabbed my video camera at my home in Bed-Stuy, Brooklyn, and took the subway train to the West Village, precisely to the stonewall monument, where jubilant crowds were celebrating this historic moment at this iconic spot for the gay rights movement. I knew that this would be a highly documented and mediated event by news outlets, participants, and tourists who happened to be there. But capturing these scenes of queer joy held an emotional significance for me at many levels. I was happy for my friend who will finally be able to get a green card. He had immigrated with his family as a teenager from Pakistan, fleeing political persecution, but was then threatened to be deported even though he was legally married in New York to an American citizen, a man like him. I was also moved by a feeling of pride, a queer universal pride, animated by an acquired political and affective consciousness gained after two years of exposure in NYC to both the clubbing gay scene and intellectual queer spheres. This happened just a few days before I was to return (indefinitely I had thought back then) to Lebanon. So, my sense of presence there was troubled by considerations of borders, nations and geopolitics. The more I thought about the boisterous atmosphere of that moment, the more I was drawn to a deeper multilayered reflection over my footage, the people and scenes I selected with my lens, but also the infinite trivially-personal and historically-important routes, events and incidents that led to the production of this filmed material, from the Stonewall riots in 1969 to the student visa (which was about to expire) and fellowship that gave me a privileged access to that place as a Middle Eastern person.

That moment of celebration both exemplified, to me, the seemingly grand progressive march of history towards equal rights and recognition for LGBTQ communities all over the world, and my tumultuous personal journey of coming to terms with my sexuality, heavily informed by western gay identity politics. As I carried that scene, both in my memory and on a hard drive, during the years I spent in Lebanon afterwards, I often wondered how the personal and historic paths converge and diverge in complex, unpredictable ways. One image in particular unsettled me, that of a muscled white man with the words, We happy few., on his T-shirt, dancing cheerfully with his friends. I found out later that this was a reference to the famous line from Shakespeare: “We few, we happy few,” when King Henry inspired his soldiers by telling them they are few in number but great in spirit.2 Gradually, these words took a symbolic dimension at the intersection of sexuality, gender, race, nation, capitalism and history. Who are the “happy few” of the queer world today? Are they fit, rich gay men who can afford to live in the gentrified West village? Are they queers leading open and free lives in the West? Are they people across gender and national divides with enough means to travel and navigate cosmopolitan queer spaces?

The “happy few” slogan seemed to have suddenly reduced the universal aura of Stonewall, provincializing its significance for the vast world history of sexuality. Asked to write about the legacy of Stonewall from a global perspective, historian Anjali Arondekar’s first reaction was one of reservation. She wrote: “To fold histories of sexuality in South Asia back into the lineages of Stonewall was surely to reproduce the very asymmetry of geopolitics of the West and the Rest.”3 But placing the invitation to think Stonewall globally in juxtaposition with her participation in a queer conference in Lahore, Pakistan, led her to ask a series of complex questions about translating and translocating histories and concepts of sexuality. Eventually, her response was rather than an “excoriation of Euro/American lineages,” a questioning of “the analytical assumptions that forge the grammar of such invitations,” and “the very geo/epistemology founding that formulation.”

When I returned to Lebanon that summer, I was haunted by the compelling modern-time demand of coming out and visibility as a queer man. But the rediscovery of my hometown, Tripoli, as a frequent visitor and filmmaker, was a humbling experience. Circulating in the city armed with a camera over the months and years that followed, I wondered about the relevance of my westernized gay identity crisis. I was overwhelmed by the expansiveness of the city with its palimpsestic walls and structures, its many layers of history stretching from its Mamluk mosques and bathhouses, its crusader castle and Ottoman clock tower to its French colonial buildings and unfinished modernist fairground. Queerness felt immanent, diffuse, mysterious, and impossible to encompass. In the tortuous streets of Tripoli’s medina or old town, I was enraptured by an imagined glimpse of the dizziness experienced by the city’s vanishing whirling Sufi dervishes. In the central public garden, I gleaned queerness in furtive gestures, quizzical gazes and whimsical smiles. I went back home estranged and alienated by a sexuality that was cumbersome for my family and society. But the very act of gazing at the city shook the contours of my constructed subjectivity. Marked by consecutive failures across history, the way life was fostered along non-linear terms, and the feeling that time was elastic and unproductive Tripoli revealed its own queerness to me.4 Filming it became a survival mechanism, a way to preserve its queer spirit.

Feminist scholar Sarah Ahmed thought about queerness in terms of re-orientation in space.5 She argued that queer people are inevitably disoriented as they encounter the world differently, but then their very act of reorientation turns into “the making of worlds.”6 Finding home again in Tripoli is, for me, about trying with every return to become part of the space, not as a fixed entity, but as a wandering soul. It is about turning away from straight, predictable lines and looking incessantly for fleeting alternative and deviating paths. Rather than a determined terrain, José Esteban Muñoz also thought about queerness as a compass that directs our aspirations and desires towards a utopian future. He famously wrote: “QUEERNESS IS NOT yet here. Queerness is an ideality. Put another way, we are not yet queer. We may never touch queerness but we can feel it as the warm illumination of a horizon imbued with potentiality.”7 But where does one begin to find Muñoz’s utopian light? And how does one believe in the “concrete possibility for another world” when the precariousness of exilic existence keeps one suspended between a hardened capitalist world and a crumbling one worn out by recurrent crises, conflicts and catastrophes?8

Perhaps, ironically, utopia, occasionally and unassumingly, manifests itself in the garden of a forgotten town, in an ailing state. For many cultures, gardens are mirrors of a lost paradise.9 In colloquial Lebanese Arabic, the word for garden, jnayne, means a small paradise. When I think of Tripoli’s public garden, I feel a rupture of contradictory emotions encapsulated in Asmahan’s voice uttering the words: “I entered once a garden…”10

This Haunting Memory That Is Not My Own