Vol. 8 No. 2 | Winter 2022
"The Ministry of Health warns that smokers are liable to die young"
Poetry

Jessika Khazrik is an indisciplinary composer, artist, technologist, writer and educatress. She works with a trans-millennial production of knowledge based on an environmental understanding of the techno-politics of voice, media and code. While tracing the history, political economy and myths of discipline, her indisciplinary practice revolves around the collective search and need for polymathic resonance, environmental remediation and healing in the 20th-21st century and long-term future. Khazrik holds BAs in Linguistics and in Theatre from the Lebanese University(LB) and a MS in Art, Culture and Technology from MIT(US) where she was awarded the Ada Lovelace prize. Her multi-channel sound installations and performances have been commissioned by Para Site(HK), Kunsthalle Wien(AT), LACE(US), Muzeum Sztuki(PL) and ar/ge kunst(IT), among others. Her essays and short stories have been published in edited anthologies and multiple publications including Bidayat Journal(LB), Zweikommasieben(CH), MadaMasr(EG), The Funambulist(FR) and Ibraaz(US). She tours internationally as a musician, performance maker and DJ and is currently a fellow at the Helmholtz Center for Environmental Health(2022-23) and If I Can’t Dance(2022-23) and guest faculty at the Academy of Fine Arts Nuremberg and the FHNW Academy of Art and Design in Basel. 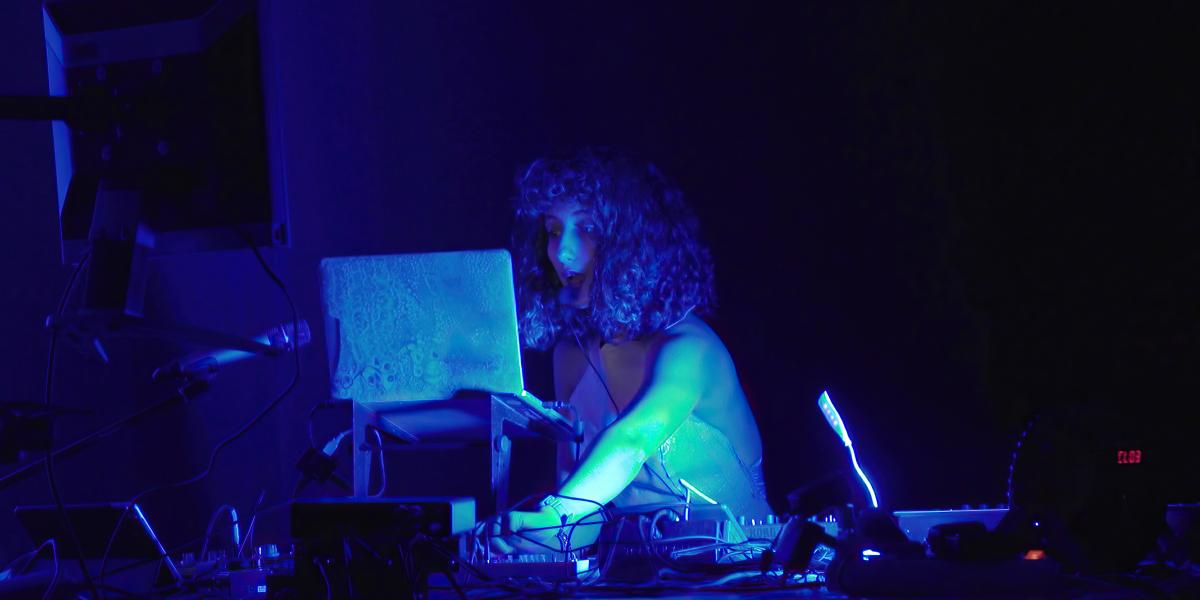 In 2016, Jessika Khazrik published the first part of Mount Mound Refuse in Kohl Journal as part of her overarching project, “حقل البراميل الزرئ The Blue Barrel Grove (2013-ongoing).” Since then, the poem has been presented as a multilingual sound performance by the artist multiple times, in Lebanon, Poland, Switzerland, the UK, and Germany. It was also extensively engaged with as an ecotechnofeminist piece of literature, testimony, and historiography. It was the subject of analysis in different types of publications on the politics of waste, the environment, and the body in post-war Lebanon, such as in Sintia Issa’s “Waste You Can’t Deny: A Slow Trans-aesthetic in The Blue Barrel Grove”1 and Helene Kazan’s “An unbound critical lived-built environment.”2 We are honored to be publishing its second part in our dossier on the environment.

“حقل في أكوام القمامة Mount Mound Refuse” is a multilingual long poem that delves into the taxonomy and global economy of waste as a recursive subject of refuse. Reflecting on the experience of growing up in an area where toxic waste was secretly brought and buried through a deal between the Italian Mafia and the Lebanese Forces, Khazrik scavenges inside and outside of the limits of language, science, sound and trace in search for an active politics of remediation.

The hybrid Italian stanzas in part II were written with the endearing support of Italian writer, curator, and friend Sara Giannini. Jessika and Sara did collective translation sessions during the lockdown in 2020 where they explored translation as a compositional tool that can take non-hegemonic forms of alliance, multilingualism, and circulation.

These stanzas were a part of an 8 channel sound installation Jessika made called “Insanificazione” that was relayed on a closed down vitrine of ar/ge kunst in Italy for 5 months during lockdown. Showcased in Khazrik’s solo exhibition “Abeyance and Concurrence,” it was not the first time that she combined sound performances and installations with indisciplinary research. Taking the form of five songs, visuals, and an indisciplinary essay that deal across scales with atomic environmental history and the body, her most recent “Songs from Nano-Spectacular Space I” challenges the perception of climate change as an accidental aftermath of industrialization by investigating the role of the military and its influence on the organization of knowledge.

Besides performing, DJing, teaching and exhibiting internationally with a trans-millennial production of knowledge based on an environmental understanding of the techno-politics of voice, media, and code, Jessika has also written extensively3 on the global economy of toxic waste trade, environmental history and advocacy, as well as history of science, AI, and music.

As we sat there,
Amused by the simple pleasure of not being noticed
R__O began to sing,

My vessel flute mountain
You can never amplify one tone
Your head is side-blown
Your guts are torn
dilapidated, reconstructed and rapidly interred
With Untold matter
More permanent than us all

In a fretless unison,
Little Arsonist and I joined her low,
Joined her high, joined her with
Groundwater ghosts, with groundwater ghosts
Ghosts Got Hosts Goats Got Ghosts
Did you get it!? Who got it?
Don’t go! x7
(Repeating while contagiously cracking up on yellow crackling earth caught in metal drifts of adolescent incessant laughter)

The three of us did sing as if
We knew.
We really did not know, and though we didn’t know why, we did know that
We shouldn’t be
Here.

I looked at her and ran
She ran and
Looked at me and said,
My memories were born before I was born
So… I remember the war more than ur māther does!

It took us 7 years and 3 deaths to understand
The aetiology of your death
To whom matter, mending and words
I am still in search
For

It took me 7 years and a half to learn
How come in 1994 in Uyoun Al Siman,
400 goats were found dead
When militias dug trenches
Filled the earth with refilled industrial drums
Tutte le armi sono tossiche
And the poison mixed with snow
And the snow filled the well
And from there, the goats drank
Murder with inter-water ghosts

Out of once vast and finite forests
Sterilized with C1, sulphur and Ammonia
Mega-flailed and rocked
Since the concrete lust of 1964
Moved from extraction to intoxication
Interring drums
Kleptocratic deaths
Easy cryptobioses
Slow yet eruptive,
cryptic symbioses
appearing in our bodies
abrasive in our unseen
flesh
all senses would follow
Intra-cellular
reneging on promises
no one would keep
To live

We were born into promises of reconstruction
Myriads of promises of being reconstructed
Onsite; online; in the false city
As if our bodies were also broken congenesis
Like the broken mountain that built our home

Yet, here we reside
In between
for 33 years of circulation horrified
29 years born, 29 years phantom
Co-morbidities innumerable
Nitrified cyto-sonics screaming for a life more worthy than
The factory shit of mafias

What else circulates in us?
If only I can excise
exercise and excise
“agnostic” from “theragnostic”
And see the many deaths in me
The vibrant lives, the many bodies we share
In our bodies there are dead factories
In the phantom bodies of the fellow denizens of my town

Our vessel flute mountain
You are the many forests we forgot
You have been when the
unfazed criminal nation
Epic’d its glib geographies
In mountains it then hid
Global run, distilled smug
Secrete heat, fire trees
To change our mind
with Cancer

If only i could count calibrate abbreviate or name the chemicals in your Body
That made you
fall
Sick.
Talk sick
Toxic
I talk sick.
We talk sick.
Heaving, crushing brief days
You are what outlives in me.

In the economic relations propagated by global toxic waste trades
Trades where highly industrialized countries secretly send their waste
Their waste to territories that neither have the facilities to treat nor produce the
unwanted matter,
Matter, we can trace a very valuable scatological endowment pertinent to
The ecocidal global economy of death.
Toxic waste trades attest
To a worldview that would accept the contamination of some places and some
bodies
more than others.
The nation-state repeats that same relation within its borders.

Since millennia, we have landed
Or have we grown in land
In their new promises
Stale matter our skins would swallow
whether we wanted or not
whether we knew or not
Summations everyone knew
But no one wanted to discuss
Since words and worlds ago

Flouncy words, frilly language, cache cache
baloney dribble سم, anoxic streets
Anoxic organs, anammox in my nerves
Anammox in my wounds
Wounds in my nerves
Gods of hidden things fixed without life
Secret bodies سكر
secret body secretions
this world is changing me
this world can’t know what is in me
again and again

Our vessel flute mountain
You are the many forests we forgot
You we-re when the
unfazed criminal nation
Epic’d its glib geographies
Global run, distilled smug
Secrete heat, fire trees
To change our mind
with Cancer

Our vessel flute mountain
Gibellina
You are my forest
I remember you
Worthy life
Worthy livening
You are our remedy
And money is the only foreigner
No poison can scale to.