Vol. 8 No. 2 | Winter 2022
"The Ministry of Health warns that smokers are liable to die young"
Artivism

Between the Forest and the Bamboo Shoot

Ward Zaraa is a Palestinian-Syrian writer and painter. His work revolves around identity, migration and individual liberties. Known as #Ward_Now, which is a collection of poems and drawings in print, in which he conveys his diaries as breaking news, where politics enters into the details of the daily lives of many. 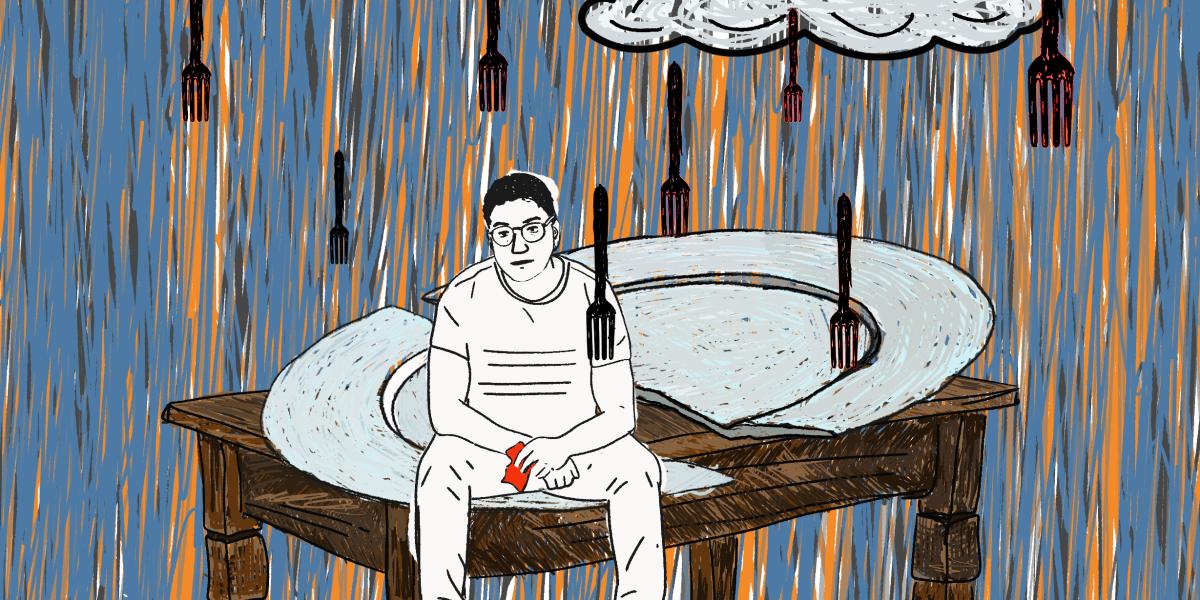 Like the land I come from, my heart is taken
Like the world I live in, my mind is chaos
And you, like the land I dream of, you are beautiful.

The first time I had a place of my own I was 31 years old. I rented a room in a shared house in the city of Uppsala, Sweden. It was financially convenient. The room was furnished, so I did not need to buy furniture. Nevertheless, the day I moved in, I headed to the market with the aim of buying nothing but candles. I bought cinnamon infused candles and a bamboo shoot plant. I chose bamboo specifically because it does not need soil to grow, nor requires stability, and if I had to move it, I would not have to cut its roots.

I settled in my new place, with the books, guitar, clothes, laptop, and the bamboo shoot which I kept in a transparent vase. I envy it, sitting there on my empty desk. If I were a bamboo, I would not fear photographs; I would have hung the pictures of my loved ones in wooden frames, made of cut-down trees, to remember my family tree.

What is exile? To be with those I was born amongst and hide my identity as a transman, or to live as a transman in a country where I do not fear speaking out among those who do not speak my language [Arabic]? 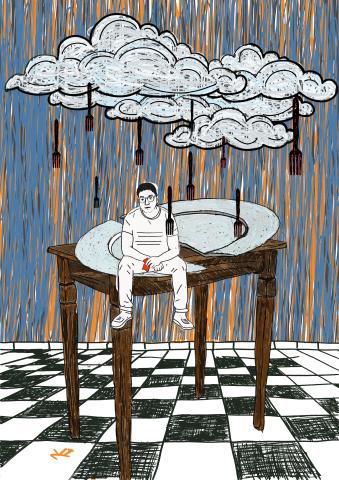 I changed my address many times after that. In every new place I moved into, my window overlooked a garden, and I would be a few minutes away from a forest – not unusual in most areas of Sweden. There are no narrow streets here and all windows overlook the road. Quite the opposite of the setting in Damascus, especially old Damascus, where windows overlook other windows and remain shut. The windows in those narrow alleys hide so many forbidden identities, ideas, and desires.

The bamboo moved with me to all my houses.

Are you like me, dear bamboo, queer and a refugee?

Being at the intersection of queer and refugee in a new country means that one has few friends. I used to go to the forest when times were rough, and I developed a new relationship with nature which enabled me to reconcile with my body. Nature helped me accept my body more and offered me the courage to assume my real gender identity as a man. On my nature strolls, I observed the details around me, and as they reflected positively on me, I felt acceptance. There are no classifications here, everything exists as it is, and each thing has its role. There are no evaluations and standardizations in the forest and there is a place for everyone.

A tree, for instance, will not be required to one day change into a flower or herb in order to fit in. It also does not have to be straight or bent to be acknowledged as a tree. The situation in human society is completely different though, for when one steps out of the preconceived stereotypes of man or woman – as dictated by customs and laws – one is ostracized. They become queer, contradicting the prescribed and narrowly defined traditional gender norm; queer for falling short of, or exceeding, the precise measurement of the stereotype. By referring to the absence of the molding stereotype, queerness holds the meaning of uniqueness, i.e., to be the person one is without identifying with who they are expected to be. Such defiance of the norm has been, and still is, the number one enemy of colonialism and capitalism which, similarly to dictatorships, sustain their power and ensure their continuity by manipulating and feeding off the stereotyped groups. Capitalism might use new techniques in its course, but it always follows the same policy. It seeks to dismantle cooperation between the constituents of society and erases the collaborative logic by feeding the ego and the competitive selfishness, all the while creating homogeneous consumerist societies where everybody follows the same behavior. A colonization without armies and without borders, and societies that are impoverished to be easily managed.

The real danger of such power lies in its ability to deceive. It may seem as if it provides all that people want, in terms of “freedom,” “independence,” and “variety of options,” but, in reality, it uses people’s desires against them by capturing them in toxic patterns to maximize profitability with no regard to the losses incurred by others. For instance, I go to buy razors to shave my beard and I find a section for men’s razors with blue and black colors and another section with pink colors for “women’s razors” which are considerably more expensive. Stereotyping in service of consumption. What if I used a pink razor to shave my beard or my female-identifying friend used my cheaper razor to shave her arms? What would be the difference? Nothing. Queerness in this context is the enemy. Awareness of and deviation from the ongoing stereotyping is highly feared by any exploitative ruling power.

The relation between the safety of the environment and the freedom of individuals within society is transitive. Whenever nature is being disfigured somewhere, personal freedoms are simultaneously being stifled and individuals are being subordinated by keeping them away from nature, their nature… and vice versa. Even systems advertising themselves as protectors of the environment – and constantly multiplying environment related regulations – consecrate individuality and consumerist patterns, erecting borders between people and their natural surroundings. This is completely unlike nature.

Changing a situation requires a change in perspective. But no matter how long one gazes into the forest, they cannot perceive the variety and vastness of it if their eye is accustomed to stereotyping and categorizing in all it consumes. Just like they would not perceive the corruption in the social system even if their eyes were wide open.