Queering Translation: On how to translate “the translated”

Born in Lebanon in 1982, Sylvana El Khoury is a critic, translator, and researcher. She holds a doctorate in modern Arabic literature from the University of Paris III-Sorbonne New. Between 2004 and 2008, she worked as a cultural editor for the Lebanese newspaper An-Nahar, where she wrote dozens of critical reviews on novels and poetry. Her research work revolves around strategies of liberation and emancipation in different contexts of domination and the stylistic and linguistic manifestations of these strategies in fictional texts. Her translations include Hector Mallo's "Without a Family" and "They Were Only Humans" by Laurent Mouvenier. She teaches Arabic and translation at the New University of Paris III-Sorbonne.

Mona is a Lebanon-based Palestinian activist and writer who focuses on liberation politics and gender issues. She studied history, political science and gender studies at LAU. Mona is a leftist and an intersectional feminist. 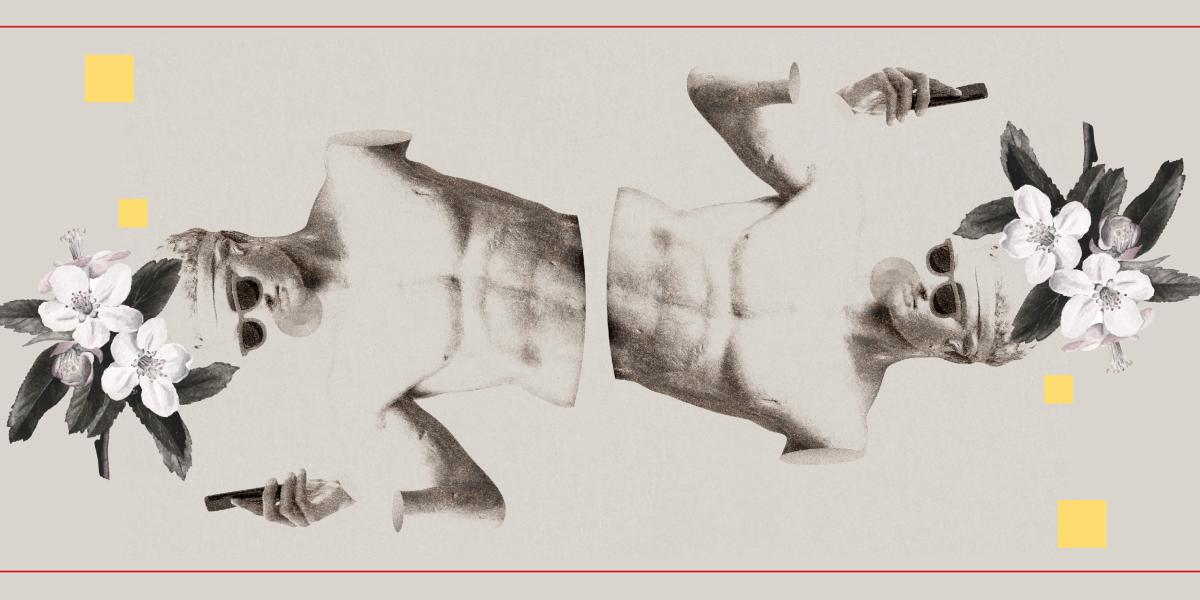 The word “translation” comes, etymologically, from the Latin for “bearing across.” Having been borne across the world, we are translated men. It is normally supposed that something always gets lost in translation; I cling obstinately to the notion that something can also be gained.
- Salman Rushdie, 1992.1

Last July and August, I translated two articles for “Kohl” that were published in the first issue of the seventh volume for the summer of 2021. The first article by Ahmed Qais Munhazim and Wazna Zondon was entitled “When I Am No Longer Here: A Feminist Collaborative Autoethnography of Queer Muslim Death and Burials”2 and the second by Maya Bhardwaj, “Queering Solidarity: South Asian Diasporic Partnership with Black Liberation Movements in the US and UK.”3 In this article I revisit the translation process itself and return to my positionality as a translator, to think, in response to the magazine’s invitation, of translation as more than a transfer from one side of the river to another, and from one tongue to another. It is a process of bridging between two cultures and two worldviews that opens the original text to its infinite possibilities and expands the horizons of the receiving language into a place that receives the alien subject without taking possession of it, nor obliterating its strangeness.

This concept of translation had its first beginnings with the German Romantics, and deepened and branched out with post-colonial studies, before it took on new dimensions with queer studies. At that point translation became the allegorical synonym of queer. Nevertheless, it shows us every time that translation is not a neutral and transparent process as it is sometimes perceived to be; rather, it is a theatre that navigates the power dynamics conveyed between two cultures, two languages, and two different value systems that are rarely ever equal, and in which the translator plays a role beyond that of a neutral mediator.

I am going to start here then, from my position as an Arabic translator living in France and translating a text for two Afghan Muslim and queer writers living in the United States and writing in English, and another for a queer American, the daughter of Indian immigrants. I refer to the multilayered identity of these three writers, their ethnic/racial origins, and their queerness, because it is the basic premise of the two texts and the place from which their writing originates as one that stands on the margins of mainstream and normative culture.

In the text of Munhazim and Zondon, the authors question the fate of their transsexual bodies after death, and their dream of a burial ceremony according to Islamic rituals. Between their home country and their exile, they find themselves, like the rest of the queer and transsexual Muslim immigrants, trapped between homophobia on the one hand and Islamophobia on the other. They are interstitial beings as described by Audre Lorde in the opening poem they shared in the article. Their words come as a reaction to the forced silence, invisibility, and secrecy in which they had to comply for most of their lives. We read:

We speak so that our demands for dignified queer Islamic burials are not denied like those wishes for queer freedoms in our lives. We, Qais and Wazina, question if our families and loved ones will grieve us as they imagined us to be or who we actually were when we are no longer here. Are our lives even “regarded as grievable” (Butler 2016, 129)? We wonder what secrets we want to bury with us and which ones we want to or can set free and bury for our living. (Munhazim and Zondon, 2021, p. 49)

On the other hand, Bhardwaj’s article deals with the organizational and activist work of the South Asian queer community in the United States and the United Kingdom, the relationship of its activists to the black liberation movements, and the impact of the caste system on all of this. The article showcases a collection of testimonies of South Asian queer activists in these two countries to manifest how intimate queer ties and anti-patriarchal patterns of organizing for emancipation are at the heart of the political work of queer communities of color. The researcher is trying to build a “counter-archive” in opposition to the narratives of the rising Hindu fascism in diaspora and the longing of these South Asian communities for “whiteness,” to show that “We believe Black and Brown solidarity is possible” (Bhardwaj, 2021, p. 83) and that it is capable of disrupting and dismantling both anti-blackness and the caste system equally.

Theoretically, and concisely, there are two radical trends that have been disputing translation theories in recent decades. The first one highlights the original text as the most important element of the translation process. Antoine Berman4 considers that every translation in which there is no trace back to the structure of the original text is ultimately a bad translation. On the contrary, the second trend led by Jean-René Ladmiral5 claims the exact opposite while prioritizing the readability of the translated text. In between both, post-colonial theorists, such as Homi K. Bhaba and Gayatri Spivak, have attempted to deconstruct the hierarchical relationship between the original and the translated text that is inherently shaped by the dualism of the central state and colonies, reproducing the unequal relationship between them.6 In practice, when the translator is in front of the text, things become more complicated and the solutions to these complications are less radical. The translators find themselves in a constant bargaining process in an attempt to find a complex balance between what the text loses during the translation and what it can gain in its new language. It is a struggle between the “fidelity” towards the original text and the readability of the translated text.

On my part, the first question I always ask before conducting any translation work is: what kind of text do I hold before me? Is it an informational text? Or is it a subjective narrative text that aims to convey experiences, feelings, and a vision of the world in which the literary elements of the author’s style and language play a fundamental role? The two articles mentioned earlier explicitly belong to the second type, albeit to a varying degree. Despite taking the form of a “study” that cannot, to a certain extent, be considered narrative texts in the traditional sense of the word, subjectivity occupies a central place in both of these articles (Zondon and Munhazim describe it as “subjective ethnography”). This is indeed a general pattern seen in recent years in the social sciences and humanities literature: the Anglo-Saxon scholarly communications that had long taken a rigorous form is currently introducing testimonies as a literary genre into its writings. In these testimonies/studies, the ego is neither hateful nor hated,7 and does not seek to hide behind neutrality and objectivity that may often be external.

Formally, but in depth, the explicit queerness of the two texts, their subject matter, and the social strata they address, i.e., the queer and trans community of immigrants or the children of immigrants in the United States or Britain, accumulate different degrees of “transitioning” to which translation only adds a further “passage” of the text.

In fact, the translation of this type of text is ahead of translation in the explicit sense. Transitioning geographically, linguistically, culturally, and in gender are at the core of these two texts. They fall under Salman Rushdie’s description of migrants as translated beings8, born across the world and still referring back to it all their lives. Therefore, the essential translation question is no longer: how do I translate the untranslatable? It rather becomes: how do I translate the translated? What I mean by “the Translated” is the hybrid, pluralistic speech/linguistic self9 that pertains to the historical accumulation of collective and individual subjectivities. We see that notion embodied in the english (with lowercase E) of the three aforementioned writers. Their english is charged and loaded with a culture that is alien to normative English. They have either carried their alien cultures from their countries of origin all the way to new foreign lands, or inherited those cultures’ burdens from their migrant parents – an alien-ated culture that embraces their perception of their own existence and the world. That world’s layers form as their gender transitioning and its consequences unfold. Thus, their language becomes a kind of cumulative translation, a transitioning process over and over again. How can I, as a translator, avoid depleting such a hybrid multi-layered voice? How can I do so while not falling into the trap that Samia Mehrez10 describes, inspired by Derrida’s11 colonial monolingualism?

There is no room for expansion in the technical and linguistic means of the translation strategies that can be resorted to in the text itself or in its lineages (footnotes specifically). But we can quickly shed light on two strategies: we can crossbreed the structure of our Arabic language through incorporating foreign alien elements, or we can search in the corridors of the Arabic language itself for an inner “stranger” to awaken, trigger, and resurrect. There is no preference for one method over the other; the two function in synchrony with each other. In both cases, we are aiming – as advocated by Kadhim Jihad12 and Lawrence Venuti,13 following the footsteps of Berman and Meschonnic – to expand the Arabic language to non-normative areas that welcome strangers and their language without possessing it. Hence, I do not arabize, I translate. It is harmless, and rather necessary for Arabic readers to be reminded that they are in the process of reading a translated text – a “foreign” content, a reading process that in order to be understood requires relinquishing their centralized knowledge and cultural lens in which they view the world alone. It is crucial to distinguish between what Nadia Louar calls “an ethnographically focused translation that distorts the original text in order to make it readable in the translated language, and a rewriting that transcends its own internal space to return to the surface of the text its original illegibility.”14

Similarly to queer, translation is above all a decentralization process. Like queer, it is inherently a rejection of normative standards and a call to dismantle the rigid borders of hierarchical dualities. It is a bridging process, not a one-way and definitive linear transitioning. It is a process of going back and forth between two cultures, two languages, two worldviews... and perhaps much more.