Vol. 5 No. 1 | Spring 2019
Decolonizing Knowledges around Gender and Sexuality
Commentary

Talah is currently a researcher at the Anti-Racism Movement in Lebanon. She completed her master’s in medical anthropology in 2016 and has since been working in Beirut on a variety of research, community-based, and creative projects on topics including migration, gender, and sexuality. She is interested in the knowledge production that happens outside of academia, particularly in relation to identity and emotion, and tries to center this in her work. 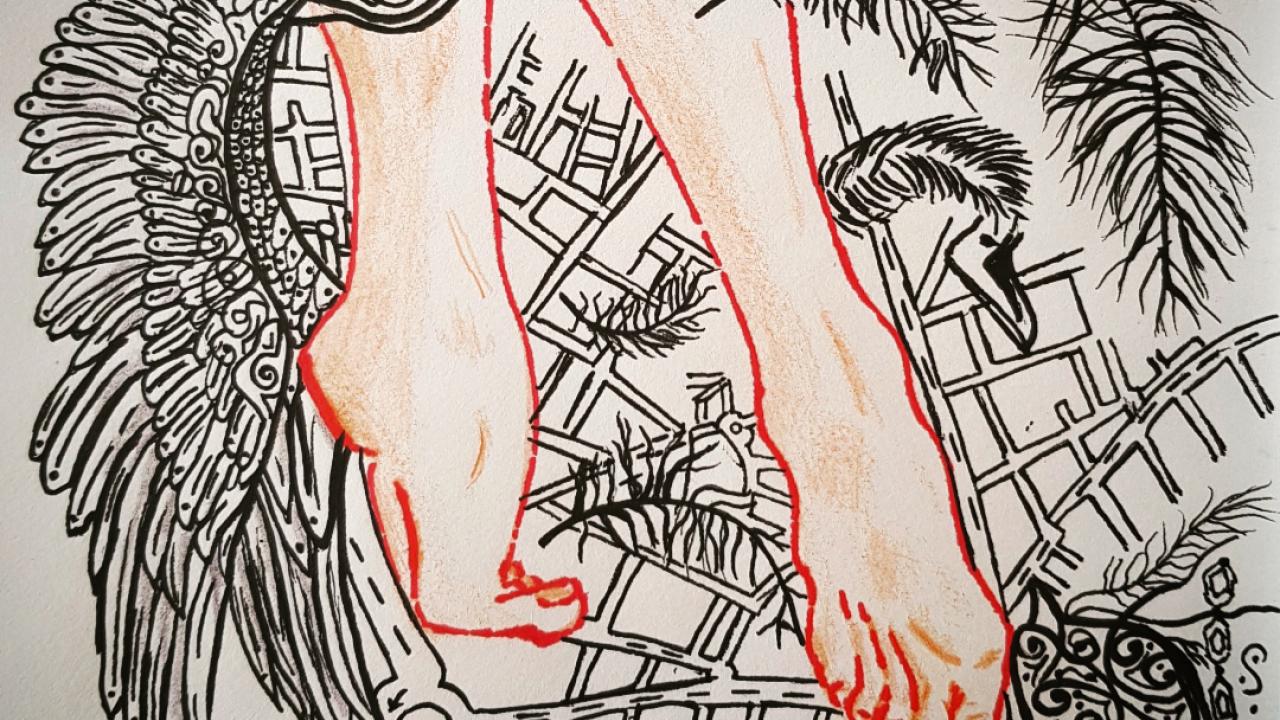 Under the scope of the Global Alliance Against the Trafficking of Women's (GAATW) project Safe and Fair Migration from a Feminist Perspective, Anti-Racism Movement (ARM) in Lebanon is conducting a feminist participatory action research (FPAR) project with Mesewat, a group of Ethiopian activist migrant workers, the majority of whom are women migrant domestic workers (MDWs).1 The questions this project asks are:

There are few accounts that focus on activists’ roles within their communities; the logistics, challenges, and successes of organizing under a repressive system and within a racist society; the emotional and community aspects of organizing; and the relation between activist groups and state entities, as well as with NGOs and local activist groups. In this project, ARM is working with Mesewat to highlight these dynamics in order to document and share this knowledge from activists’ perspectives, and to ultimately organize research-based action. This text is an overview of the conditions under which MDWs live and work in Lebanon, and a meditation on how FPAR methodology intersects with MDWs’ activism in ways that challenge the knowledge production that comes from the state and from research about (but not with or by) MDWs in Lebanon. As the primary researcher of the project, and having a history in research in the social sciences, my aim here is to provide a brief reflection on how experience-based knowledge and theory-based knowledge contribute to each other in ways that allow for rich, valuable, and constructive research. The text was written based on a presentation at the Decolonizing Knowledge around Gender and Sexuality conference, organized by The Center for Transnational Development and Collaboration with Kohl Journal on November 30, 2018.

FPAR methodology works towards reclaiming knowledge and driving action in feminist ways. That is, it takes gender and its intersections seriously, it prioritizes silenced voices, and it values the knowledge and experiences these intersections hold. It centers the collaborative building of knowledge and movements, as well as local feminist discourse, participatory engagement with research, and action around local theories of change. This approach contests more traditional research methodologies that tend to claim ownership over knowledge. This is often done by using participants’ narratives without framing or accrediting them as a form of knowledge; by imposing misconstrued understandings of participants’ experiences to feed into a certain research agenda; by treating participants as fascinating objects to be studied; or by containing the research within the realm of academia, rendering it inaccessible and without purpose for the participants.2 These methods largely stem from the colonial history of qualitative research, which translated as white, western “explorers" studying the “other” – the “barbaric,” the non-white, the tribal, the “uncivilized” – during the colonial era. By adopting an FPAR approach, we hope to contribute to research that challenges these practices, first by acknowledging that knowledge is most valuable when co-produced, second by allowing the methodology to give space to this production, and third by rendering the research useful for the participants themselves.

In this particular research project, ARM intends to understand the theoretical and practical dimensions of how and where the state meets MDWs’ activism. We also seek to look at how activist MDWs, and more specifically Mesewat members, navigate a system built around silencing them and containing their voices and demands. As a feminist organization working towards movement-building and justice for migrant workers, particularly women migrant domestic workers, one of ARM's priorities is to support MDW-led community organizing. As such, we are conducting this project with Mesewat with the aim of co-producing knowledge around the kafala system, and with the intention of understanding community groups’ most urgent needs from organizations, collectives, and activists who want to support their work.

Migrant domestic workers (MDWs) and migrant women activists continually face both implicit and explicit silencing from individuals, society, and the state. Their basic rights, freedoms, and needs are consistently denied because they are governed by the kafala (sponsorship) system, a system regulated by The General Directorate of General Security (GS). Women MDWs are under the sponsorship of a single Lebanese individual in both their residency and work permits, and should be employed by this same person. They are very often “sponsored” in their accommodation as well, living with their employers under a strict and binding non-standardized contract. It is also very common for employers to hold workers’ identity and visa documents, restricting freedom of all types of movement, from outside the house/workplace to outside the country, to the sponsor’s own liking.

Being intentionally and explicitly excluded from the 73-year-old labor law (Ministry of Labor, 1946, Article 7), MDWs are denied basic labor rights and conditions, including the right to assemble, bargain, and unionize. All violations fall under the ruling of GS that tends to abandon standardized rights and block access to justice, opting instead to make judgments at its own discretion. Any act that defies the sponsor or their control can criminalize workers. The “criminal” nature of these acts are ultimately decided by GS, as it can criminalize anything: from the basic right of leaving the workplace/house outside of working hours, to being a victim of injury or brutal assault while undocumented (Anti-Racism Movement, 2018), to being a migrant community organizer or activist working towards safer and more just working and living conditions for MDWs in Lebanon.

Activist MDWs have started and been involved in local justice movements for over a decade now, and MDWs have always undermined and challenged the kafala system, both quietly and loudly, both in their daily work lives and in their public social lives. However, when demands are made or resistance is sensed, migrant workers and activists face being (have been, are being) ignored, punished, mocked, assaulted, criminalized, detained, deported, or killed. This is the case whether they are addressing employers or the state, or demanding more humane working conditions and wages, inclusion in social and public spaces, or the abolishment of the violent system. MDWs are met with severe violence at the hand of individuals – who, through sponsorship, hold much state power – but also directly at the hands of state institutions that criminalize free movement, as well as gathering, organizing, and collective bargaining.

The kafala system is based on and reproduces racist, sexist, classist, and nationalist notions of citizenship, rights, and political power/access. Resistance is met with violence because the kafala system is built to counter it. It is built to self-justify and reproduce its own violations, guised as migrant labor policy. MDWs’ resistance and activism is criminalized because it can be, because MDWs’ legal and citizenship statuses, and by association, their race, gender, and work-type, label them as migrants and workers void of the necessary privileges to be considered anything more. This strict categorization denies them any access to the kind of political citizenship or power needed to contest the state’s ruling over their residency, employment, bodies, and lives. Thus, when fighting against state policies (read: state violations) is considered a violation (read: a threat), voice becomes a great challenge to the state.

Mesewat’s experience as an activist group demonstrates how these large-scale dynamics have material effects on the ground. Through FPAR, we are able to bring out these narratives in ways that go beyond only reflecting their experiences. The narratives provide a concrete basis for unpacking the complex workings of the interaction between the state and MDW-led activism; for co-constructing knowledge on citizenship, state power, gendered and racialized labor, and resistance; and for understanding Mesewat’s needs from allies and supporting groups in a more nuanced manner.

As methodological reflection, this project considers the ways in which FPAR and activism come together to jointly produce knowledge that centers women migrant workers' voices that are silenced by the state, and often also by research. Bringing activism to FPAR allows for the two to construct the research, the action, and the outcome together and in support of each other. While FPAR is taken seriously as an academic research method and platform for knowledge production and dissemination, its explicitly feminist politics has the potential to question the structures that govern knowledge production in the first place, because these politics challenge ideas of “objectivity” in research. They also consider research participants to be joint producers of knowledge rather than subjects of analysis.

In their work, Mesewat is questioning the state’s structures that govern their bodies and rights – structures that define the status quo and that seep into social behaviours, employment relations, and individual mentalities. In doing so, we can understand the demands that Mesewat (and other migrant activists) make as knowledge being shared about what a safer and more just migration system would look like. This knowledge is embodied daily through individual acts of resistance, communal organizing, and loud social activism, but is also spoken out explicitly through life narratives, reflections, and policy recommendations in the context of this research project. Through FPAR, this knowledge is meant to be understood as primary knowledge about what the system looks like, how it is experienced, and how it can be ameliorated. As such, the project can give space for the knowledge that is derived by Mesewat’s experiences to be centered within the realm of research, challenging the dominant norm of research in academia.

By transferring the knowledge that feeds into the “research” aspect of FPAR to its “action” aspect, the project can also become a platform for supporting Mesewat in their activism against the state. Ideas for action are discussed throughout the project, which gives space for them to develop within the conversations, interviews, and events held throughout the research process. In this sense, FPAR methodology itself can be utilized as a challenge to state structures, leaving the realm of academia and research and basing itself in action. Thus, activism and FPAR, action and research, can support each other in challenging the various structures that continue to deny voice to those who hold extremely valuable knowledge because it is seen as a threat to the system.

In this way, conducting an FPAR project in the context of activism can act as a decolonial method on two levels. Firstly, it encourages researchers to call into question research norms that are based on top-down methods deriving from a colonial mindset. It does so by promoting a participatory approach that redefines the participant’s role in producing the research. In this project, for example, it takes the knowledge produced by Mesewat about the kafala system and organizing against it as a challenge to the way in which the state normalizes the categorization of migrant domestic workers as second-class citizens. Moreover, in doing so, FPAR is prioritizing activist voices – voices not usually actively centered in research. Secondly, FPAR encourages research-based action defined by participants, relocating research from its original place in academia to the more accessible and productive space of advocacy and action. In this context, this takes the shape of supporting Mesewat's work against the state. This not only means that Mesewat as an activist group is being supported, through research, in their work against the state, but it also means that their activism is redefining the traditional role of research and the space to which it belongs.