Vol. 5 No. 1 | Spring 2019
Decolonizing Knowledges around Gender and Sexuality
Editorial

Decolonizing Knowledges as a Feminist Process

Gráinne Charlton is a feminist writer and organiser. Gráinne recently completed her MSc in Labour, Social Movements and Development and is particularly interested in transnational organising, methodologies, and intersectional approaches to precarity and labour and is currently working as a communications and outreach assistant at the Centre for Transnational Development and Collaboration. 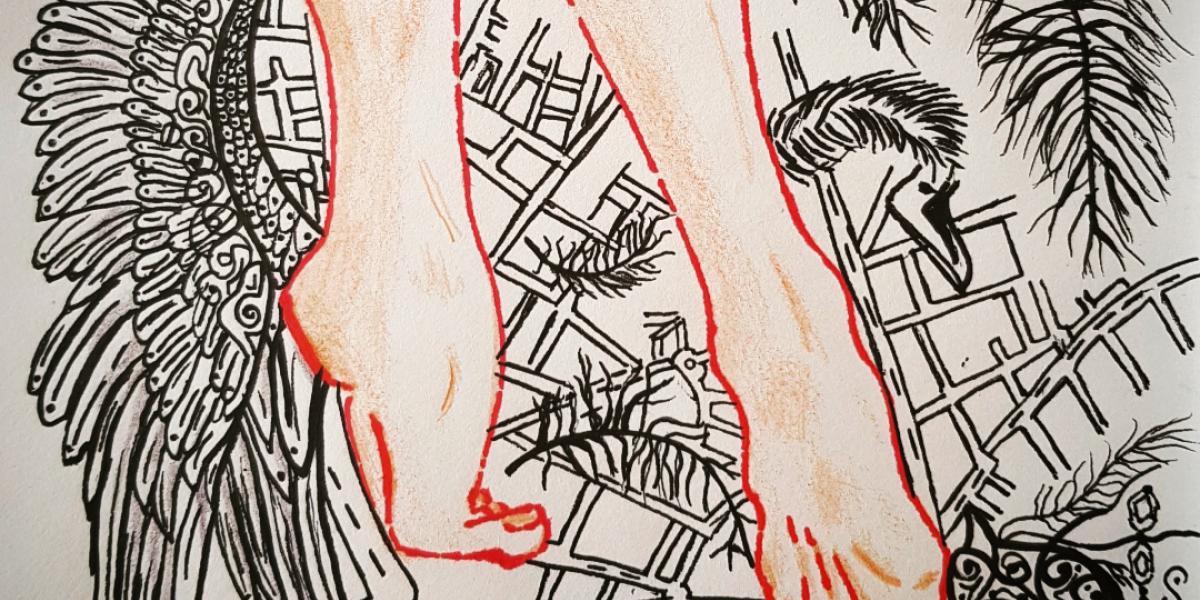 When the Centre for Transnational Development and Collaboration (CTDC) and Kohl Journal came together to contribute to a transnational project of decolonizing knowledge around gender and sexuality, we knew, materially and affectively, that decolonial processes were neither linear nor evident. We were motivated by the desire to engage in a decolonial project that would extend to our practices, structures, and mechanisms, not simply in the content of the knowledges we produce. This prompted us to ask difficult, but necessary questions. How do we hold ourselves and each other accountable when faced with the messiness of doing political work at the discursive level? How do we come together as feminists, making space for each other without shying away from challenging each other? How do we turn decolonial processes inwards and towards the spaces that separate us from each other? A follow up to CTDC’s third annual conference that was organized in collaboration with Kohl, this special issue is the culmination, rather than the finality, of this process of coming together.

The borders of our conference – material, financial, and of our labour – were drawn up by others, compromising our vision. The final conference line-up was drastically different from what we had initially imagined as we had to contend with visa rejections, lack of funding, and absence of “pay.” Absences, then, became a reflection of the systematic silencing of knowledges in the Global South within academia and through these borders.

CTDC began organizing the annual conference in April 2018. Excited to start the ball rolling, we arranged a venue with colleagues at the University College of London (UCL), invited speakers from the Global South, applied for funding, and drafted the call for papers with Kohl. The call, centered on decolonizing knowledge around gender and sexuality with an emphasis on methodologies, emerged from joint frustrations and experiences across our research and consultancies, and a wish to discuss, share, and learn alternative methodologies and approaches to gender and sexuality. Enthused by the theme, we drafted, amended, and collaborated to ensure the call was explicit in calling for structural change to knowledge through methods, while acknowledging those outside of the academe. As early as July, we selected sixteen speakers from Pakistan to Argentina to Palestine. We wanted the conference to be a place for us to share and build transnational feminist solidarities that are not confined to borders, whether academic- or state-imposed.

Early on, financial barriers challenged and undermined this vision. CTDC applied for several funding opportunities in April with the hope of securing funding for our speakers’ international travels. By the time we selected the abstracts in August, our emails to our speakers confirmed what we had stated in the call for abstracts: we would not have funding for international speakers. Although many of them initially accepted, several were eventually forced to drop out in the interim months due to the lack of funding from their own universities for international conferences. Speakers from across the Global South – Argentina, South Africa, Brazil, Egypt, Lebanon, and Palestine – were unable to speak due to funding restraints, and were therefore unable to share the conference platform in London on November 30, 2018. The lack of funding for and in Global South academia reveals why discussions around decolonising need to occur across borders (and within the Global South) to build sustained, accessible, and transnational feminist solidarities. CTDC’s donor partner was eventually persuaded to provide a little contribution to the conference. The way in which capital and profit shapes knowledge is not unknown to us. However, in the absence of “institutional” backing (i.e. from a university), the border was closer and more confining.

Meanwhile, CTDC wrote formal invitation letters for visa applications as well as for workplaces, detailing the venue and timing to support speakers’ applications. Egyptian speakers first had their visas rejected, followed by a Tunisian speaker. This rejection meant to us, again, that despite its decolonial politics and intentions, our conference ended up being almost exclusive to speakers who had visas, passports, or residency in the geography of the UK. Our frustration and resistance could not erase the fact that the borders of our conference were literally delimited by geopolitics and North/South dynamics and flow of resources. In fact, these examples are part of a wider, systematic side-lining of Global South academics who do not fit the tokenistic positions laid out for them. The border speaks to maintain the grasp of universities across the Global North in being the core producers of “knowledge,” internalising and appropriating academic knowledges from the Global South and its diaspora when suitable for their agendas.

The absences in themselves are symptomatic of the tireless, yet unrecognised labour of academics from the Global South, which was discussed at length during the one-day conference. Ultimately, feminist knowledge production and organising also becomes a question of access and accessibility, which tend to be lacking in such events and spaces. While we did ensure that the venue was wheelchair accessible, our lack of funding limited us in providing aide for people with different abilities, such as sign language translation, or even translation in general. We came to the conclusion that the lacking in financial resources experienced as barriers is a mechanism that further disconnects knowledge production from access to different, alternative decolonial knowledges.

When the conference event on our social media platforms snowballed into thousands of people interested and hundreds attending, we asked ourselves why the event was so popular amidst the growing numbers. We speculated about social media strategies, but perhaps the most reflective consideration was how the words “decolonising” and “gender and sexuality” are perceived as “sexy” academic fields that are emerging across UK institutions. As organizers, we were nervous, caught off guard by the huge hype around our event, particularly in light of funding and visa barriers. To this end, we worked within our means to widen our remit and expand our audience. We ended up holding the conference at Birkbeck University of London, and received support from the Decolonizing Sexualities Network.

We find it equally important to underline the unpaid labour that went into the organizing of this conference. The expectation within academia to produce or work for free, and in some cases pay to submit or present, is one we find problematic. As an independent organization, CTDC sustains itself principally through consultancies without funding or charity status. Moreover, CTDC uses its income from consultancies to fund activities and initiatives that do not get funding from mainstream funders. The unpaid element of organizing, speaking, volunteering, and writing for this conference is fundamental to recognise. Despite this unpaid labour, and as the popularity of the conference soared, the emails for tickets became more insistent. Yet, our conference was neither a service nor a product. It neither brought revenue nor provided any remuneration for us as organizers: we “broke even” after lunch and dinner provisions for participants. We mention the unpaid labour not to propose our conference should have been for profit, but to shed light on how capital unevenly constrains our, participants’, and even the audiences’ ability to contribute to discussions, projects, and organizing around decolonization.

Due to our commitments to transcend the imposed borders of the venue and its geopolitical location, not only were we keen on making the conversation in London visible, but we were also prompted to include those who were unable to attend to contribute to this special issue of Kohl. Nour Abu-Assab and Nof Nasser-Eddin, co-directors of CTDC, shared their written reflections on the need to recenter Palestine in decolonial feminist projects. Additionally, Sabiha Allouche, Akanksha Mehta, Talah Hassan, and Shama Dossa were all at the conversation table in London. Their papers and texts, published in this issue, reflect the ethos of what the conference attempted to convey. While Sabiha theorizes the “reluctant queer” as an alternative to the LGBT liberalism/homophobic Global South dichotomy. Akanksha maps the landscapes of decolonial pedagogies in the classroom and on campus as care labour, expanding the breadth of teaching spaces. As for Shama and Talah, they each discuss methodologies of research they were involved in and that carry a decolonial scope: Shama discusses using arts-informed inquiry to challenge empowerment narratives in Pakistan, and Talah reflects on the politics of feminist participatory action research with migrant domestic workers in Lebanon.

Naveen Minai and Sara Shroff co-authored a paper on queer feminist friendships and practices of care as knowledge. Unable to present it in person at the London conference, they both asked to be in conversation with speakers from the conference. Kohl asked Arianne Shahvisi and Sophie Chamas, who were at the conference but opted out of publishing in this special issue, to read and reflect on Naveen and Sara’s paper. Slowly, a virtual and feminist space of discourse-making and negotiation unfolded between Kohl and the co-authors, who all found the back and forth conversations to be enriching, generative, and caring. It was the process with Naveen and Sara that made space for unlearning the dynamics of editor/reader/author and publication, as much as the content of the paper itself.

As a final note, we would like to reiterate the importance of disrupting the locality of knowledge from power centers. Far from reproducing overused East vs. West binaries, we look instead at how resources are allocated and capital distributed, privileging knowledges at the expense of others. Publishing this special issue in Kohl and bringing the conversation back to feminist, virtual spaces are ways to counter and resist the status quo of access and accessibility. They also reshape contexts as defined by the borders we create for ourselves and others. In the same vein, coming together as Kohl and CTDC was feminist pedagogy in the making; it informed our practices and allowed us to acknowledge and recognize the mess within. It is that same pedagogy that makes space for affect as a legitimate form of feminist collaboration, converging in fluid encounters that overlap, interlace, and come undone.