Ghinwa Abdel-Razzaq is a Tripolitan from Akkari origins. She is a third-year student of architecture. She is interested in site analysis and is working on awareness sessions about the importance of public spaces. Her ambition is to write and direct a film.

Jana Jemali Traboulsiyeh, a third-year architecture student. Her interests are music, drawing, and crafts. She organized a march under the title "Unemployed," which had good echoes. Her ambition is to have a business of her own in the field of crafts. 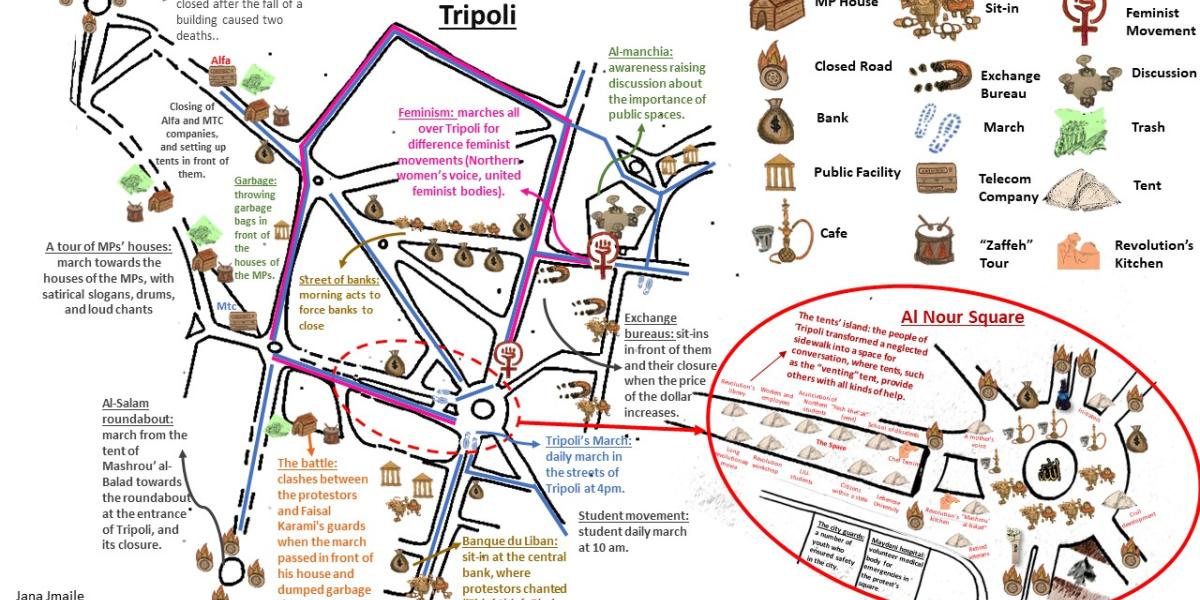 Since the beginning of the revolution, Tripoli never stood silent, starting from morning marches, to the banks and public facilities, to the marches touring the streets of the city, until the evening when discussion circles and gatherings are held.

The Revolution Square, previously known as Al-Nour square, gathered the young men and women of Tripoli who wanted to change the stereotypes about their region. In the first days of the revolution, we saw the people of Tripoli dancing to revolutionary and techno music, happy to have acquired a public space that belonged to all of them and that was not exclusive to a particular class. The phrases written on walls surrounding the square were catchy, such as “Let the anxiety fall” and “Let the fear fall.” Similarly, some Tripolitan chants gained fame, such as “my sir, my sir, my sir, you are corrupt as far as I know,” or, “You are great, people of Tripoli.”

In the map of Tripoli, we shed light on the most important events that took place in the region, such as the daily marches that preserved the revolutionary feel, as well as the daily sit-ins in front of public institutions. However, the biggest event was the “Zaffeh of MPs,” in which most of the residents of the region participated, and that culminated into an altercation with the security guards of Faisal Karami. This action was sufficient to break the wall of fear of the Tripolitan youth, and to strengthen their commitment to face the people in power without exceptions.