Huda is a human being passionate about the Arabic language, who aims to create content for the causes of human beings in all shapes and forms.

Sara Khayat is a graphic designer and visual artist from Damascus. Her work primarily centers around women’s issues, identities and forced disappearance in Syrian prisons, as well as children in devastated areas in Syria. She fights for her causes and explores herself and her identity through drawing personal experiences and visually documenting memories 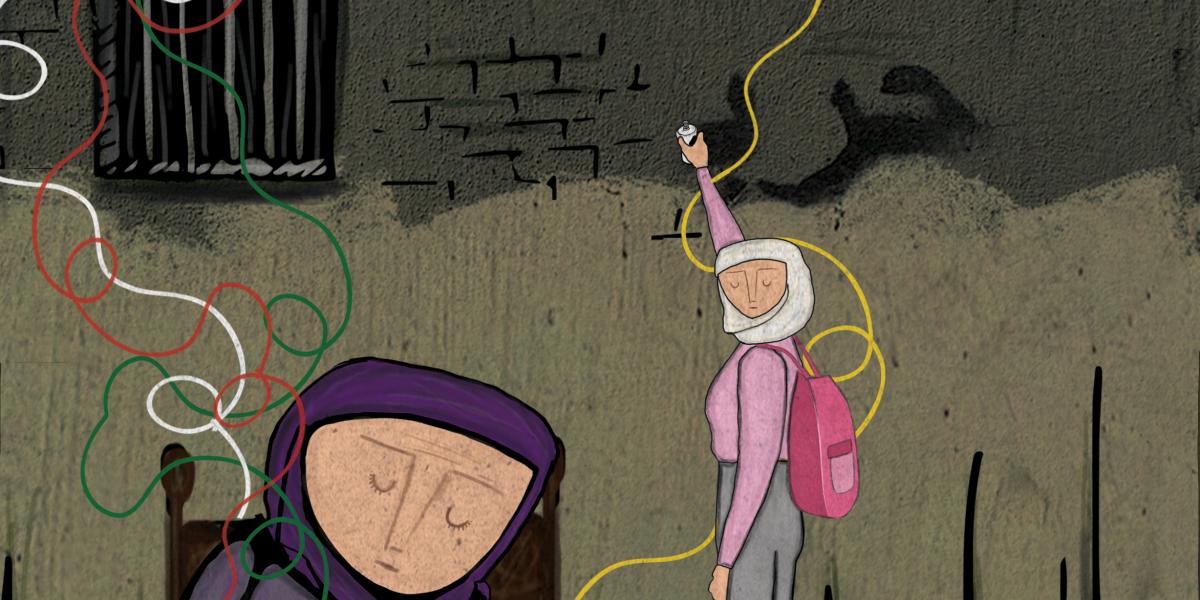 Since their beginning in Tunisia in 2010, when discussing the role of women in regional revolutions, we can only notice the limited spaces allocated for Syrian women. By this, we do not mean to question the intentions of the platforms that try to highlight the active role of women in every revolution that took place, from Tunisia to Egypt, Libya, Syria, Iraq, and Lebanon, for their streets are burning until this very moment. Nor will we whip ourselves, burdening them with the full brunt of responsibility for the existing shortcomings. We shall all try and continue to try telling our stories that the regime, in all its facets, is attempting to obscure and bury. We will keep ourselves from accusing each other, assuming bad intentions, or surrendering to conspiracy theories and narratives of victimhood. Not only do we not need all of that, but they would only benefit our corrupt regimes.

The revolutionary Syrian woman does not need to be defended, nor does she need a defense of what she has invested of herself towards freedom, justice, and equality. We are not defending her either. We are only trying, however modest our attempts may be in relation to what these women have offered us, to document some of what they have given towards the restoration of their human dignity, and without hesitation, despite the terrorism of the Assad regime and its likes, towards Syrians in general, and Syrian women in particular.

Today, we highlight the story of Zainab, "Um Al Zalghouta," as I called her after hearing her story. She is a forty-nine-year-old Syrian woman, a mother of four girls and a boy. She stopped pursuing her basic education and got married, like many other Syrian girls from her community. She lived her life as a housewife, looking after her children. She did not need to work or earn money, as her husband was well off. But all this changed after the Syrian revolution, which ranks she joined without hesitation. She chanted in peaceful demonstrations alongside the daughters and sons of the Damascene Qaboun region, among others. She marched in mourning of those who were martyred by the regime’s soldiers. Throughout these events, she was known for her resounding zalghouta, as it would burst from the last rows of the demonstration so that those in the first rows could hear it, to the joy of all the participants.

Zainab was not satisfied with protesting only: she transformed her house, located in an area that was under the control of the regime at the time, to a headquarters for preparing banners for demonstrations and sewing the flags of the Syrian revolution, for which she used to personally buy the supplies from the Al-Hamidiyeh market. She also prepared balls that she and other women colored with the flag before throwing them in the Barada river. She manufactured the revolution’s rosaries and distributed them to the largest number of young demonstrators possible so they could decorate their chests with them. Later on, people came from all the neighboring regions asking for her rosaries. Um Al Zalghouta had many responsibilities; she protested and organized from within. But that was not her only role. She also distributed medication and assisted the ambulances that transported the injured following the chemical massacre of Ghouta in 2013.

She exposed herself to all kinds of danger from the regime, its thugs and unofficial militias, who have not spared her or her family. She and her daughter were arrested in October 2011, for writing “you should leave you dumbass, there will be no dialogue” on a wall. For that, they spent nearly three months in the intelligence branches, under physical and psychological torture. Their suffering did not end after they left prison. Rather, a new stage of pain began, as society denigrates the former detainees and sees them as perpetrators. But Zainab and her daughter struggled to reclaim their dignity from the claws of the criminal regime. Their hardships continued, from siege to displacement followed by displacement. In the areas of displacement, the armed factions, especially the “Army of Islam,” were merciless, just like the Assad regime was, as they were yet another side of its many facets, according to the testimonies of Zainab and thousands of others. After years of humiliation, starvation, murder, and arrests, they left everything they knew or had and moved to Turkey, bearing scars that time won’t be able to cure.

Zainab is not the only Syrian woman who has experienced all this pain in her quest for liberation against all oppression. According to the report of the Syrian Network for Human Rights, more than twenty-seven thousand women and girls were killed in Syria, and more than ten thousand women and girls were arrested or forcibly disappeared by the regime and other armed factions, which at some point claimed to stand with the Syrian people against the crimes of the Assad regime.

The drawing is by Sara Khayat, and was made for a book by Lama Kannout, Published by The Day After Organization (TDA):  “So I'm not kept in the shadows – oral memory of Syrian women, survivors of detention.”