Yasmine is a London-based feminist writer. She is currently a PhD candidate at the LSE Department of Sociology, where she focuses on biopolitical violence in Syria. She tweets at @yasmine_kherfi. 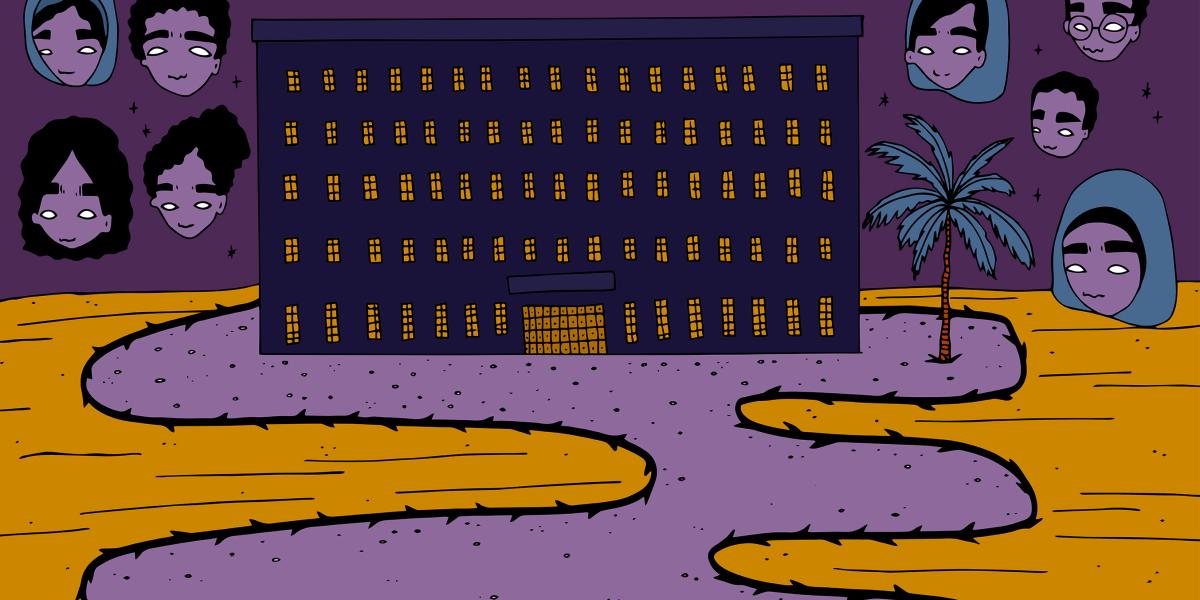 Having a SWANA-centric platform to address ableism is rare, and reflects the extent to which society’s ableist modes of mental conditioning effectively discourage conversations deemed taboo or “3eib.” It becomes particularly difficult to discuss such topics without acknowledging that the frustrations in writing about them (for instance) come from permeating societal modes of self-censorship and shaming that we must reflexively challenge. It is important to unearth such concealed narratives, not as token “Middle Eastern perspectives” of sudden popular interest that are destined for belated “inclusion” in dominant discourses on disability awareness, but rather as parts of an online repository of knowledge, made primarily for the communities it speaks of and to.

In this piece, I briefly share some reflections as a caregiver to my younger brother who lives with a genetic disorder. In effect, words such as “disorder” are connected to the ways in which society constructs “normality.” Disability justice pedagogy highlights these linguistic and political contentions to problematize the ways in which we think about and relate to the construction of an archetype for personhood. This line of questioning challenges the negotiation of corporeal standards in the first place. In so doing, it disrupts the life-diminishing narratives that not only pathologize neurodiversity but also dismiss and marginalise experiences that depart from the default set by a system built for white, able-bodied, male subjects.

In the wake of the current pandemic, the proliferation of mutual aid networks helped mainstream solidarity-based systems of support that highlight people’s interdependence, demonstrating the necessity of radically changing our understanding and relationship to community, as well as promoting modes of social organization that better cater to people’s varying needs. This contrasts with public health responses to the pandemic, which have largely accentuated how bodies are differentially valued, hierarchized, and cared for, based on individualist assessments of human worth. The latter include metrics such as productivity and efficiency, which are intimately linked to the capitalist ethos that views profit maximization as the prime vehicle for determining human value and improving one’s quality of life. Such metrics are not only philosophical abstractions; they drive policies that further seep ableist practices and ways of thinking into everyday life and the built environment.

In addition to factors such as race, gender, and class hierarchies, ableism is compounded by other specificities and localised states of “exception” that shape political subjectivities in a particular milieu, such as experiences of settler colonialism, varying modes of governance and surveillance, military occupation, police brutality, and forced displacement. Yet, hegemonic discourses on ableism are often limited in their analysis of biopower and the overlapping modes of oppression that shape the lives of “non-able-bodied” peoples from West Asia and North Africa. While problematizing “inclusion” narratives and promoting understandings of accessibility are important, dominant discourses predominantly consist of rights-based approaches that promote individualist explorations of what progress looks like, which in turn limits the parameters of debate and treats “disability issues” in isolation from other forms of oppression.

Seldom do we hear, for instance, how the racialisation of “Arabness” and “Muslimness,” as well as the institutionalisation of Islamophobia in many parts of the world, aggravate forms of “othering” for people with disabilities who embody these identities. For instance, in 2017, a story of a teacher in Texas who called a six-year-old, non-verbal, Muslim boy with Down’s Syndrome a “terrorist”1 triggered extreme concern over the safety of neuro-diverse Muslim children (with varying modes of expression and communication) in the rising Islamophobic climate in the United States. Although notorious for indiscriminate violence, the Israeli army’s murder of a Palestinian man with autism, Eyad Hallaq,2 this year brought to attention the impunity of state and settler-colonial violence vis-a-vis people with disabilities. Elsewhere, several instances of police interaction and brutality with neuro-divergent people highlight the dire need for linking conversations on disability justice with abolitionism.3

While thinking through the intersections of disability and race, it is also important to note how “othered” populations are typically subjected to various forms of confinement. Carcerality is expressed in a continuum, across various institutions such as the prison-industrial complex, immigration detention, and psychiatric centres.4 Despite legacies of institutionalisation, segregated schools for children with disabilities still operate in many places, on the grounds that they provide specialised education and resources that would otherwise not be afforded to them. However, such institutions ultimately reinforce separation rather than redress inequities in the education system. Instead of striving for integrative solutions, or better, question why education systems do not consider the needs of all students, segregated schools developed as an entirely separate and parallel system for children and teens whose needs are neglected and considered secondary by the state.

Through my younger brother’s experience attending a segregated school for kids and teenagers with “special” needs in the Gulf, I began to think about the ways in which human worth is communicated and imposed through exclusionary architecture. While teachers and school staff were caring, well-meaning, and committed to my brother’s learning, as a caregiver, feelings of shame took over when I acquiesced to my younger brother’s placement in an enclosed school environment that was palpably carceral. There were no other schooling options available. Gradually, I realised that while educators do the best they can, such institutions are ultimately designed to isolate and conceal – whereby curated activities to celebrate students in private, within the confines of the classroom, could be mistaken for social inclusion and participation.

The issues that arise from exclusionary discrimination are not due to specific individuals, but are rather a consequence of the society’s structure. Under capitalist patriarchy, specific bodies are perceived as peripheral, exceptional, faulty, and anomalous, such that addressing needs that are not catered for in the mainstream requires laborious and inefficient appendages to the system. At their roots, axes of oppression promote a eugenicist logic that dismisses certain lives as lesser. The term “disability” often operates as a punitive classification for the ways in which it enables social institutions to pre-deterministically marginalize and restrict access to important services that are tacitly designed with the able-bodied in mind. The term “disability” encodes people as socially incapable beyond their actual conditions and needs.

This became particularly visible in the societal response to continuing education throughout the pandemic. With the closure of schools for many months, I had mixed feelings about the perceived privileges of “normal” school life that were suddenly being withdrawn from many children and teenagers to ensure their safety. While many students favour at-home learning for safety, there are layers to the disruption they experienced, and virtual learning tools are largely designed with neurotypical, able-bodied students in mind. For the latter, the new normal varied between continuing online classes, attending school in person with added safety precautions, or a mixture of the two. For kids who had been in segregated schools, staying at home often meant a radical disruption5 to education, as many of the pedagogical tools and methods they rely on cannot always be delivered virtually. On the other hand, there was nothing “normal” about segregation. Resuming segregated schooling only furthered social exclusion and neglect – these were sustained and disguised in the semblance of routine before the pandemic, and will continue in other ways beyond it. Resuming business as usual means callously continuing a system that fosters both vulnerability and marginalization.

Public health strategies devised to tackle the current pandemic have exposed the extent to which we have become generally desensitized to the necropolitical language and impulses of capitalist society. While we re-imagine political possibilities to realise our aspirations for genuinely inclusive communities rooted in care and mutual aid in the pursuit of liberation for all, how do we personally resist carceral ableism, care for – and act in solidarity with – those differentially impacted by it? We must nurture our feminist praxis with complexity, rejecting able-normative supremacy and reductionist narratives in our politics. Disability is not a monolith. To manifest the forms of care we wish to see in our communities, we must strive for context-sensitive, nuanced understandings of liberation that equally account for neurodiversity and are committed to combating carceral institutions in all their existing forms.