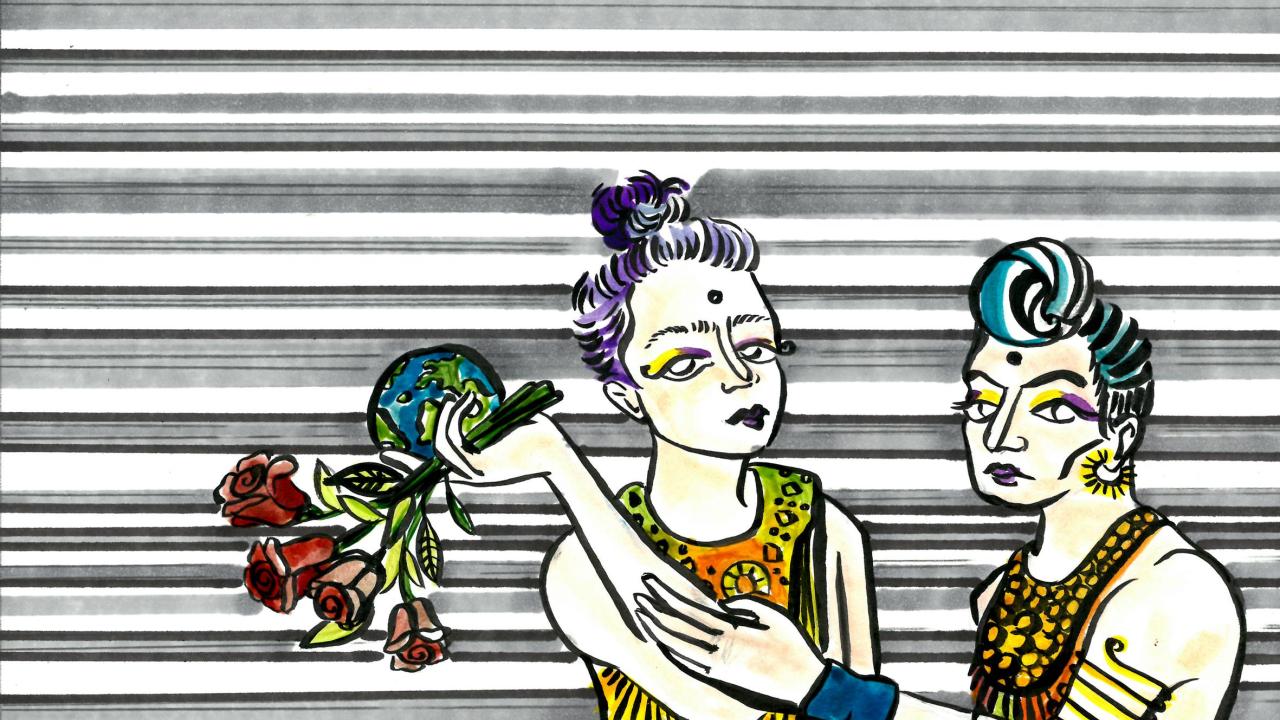 Despite long and labouring protests, movements, and direct interventions, not much has changed in terms of sexual crimes and violence committed against womxn2 in India. As I scrolled through my social media profiles on yet another unsuspecting day full of news of dead, murdered, maimed, violated bodies of womxn, I came across a video from Chile which was yet to go viral. “Y la culpa no era mía, ni dónde estaba, ni cómo vestía” (“and the fault wasn’t mine, not where I was, not how I dressed”), chants the Chilean feminist collective LASTESIS in protest against rape culture. Womxn from various parts of the world have since identified this intervention as a feminist anthem, made it their own, and performed it in streets across the world. Flash-mobs have been arranged, lines have been learnt and rehearsed – the street has come alive. Womxn are in protest. They are protesting against the widespread and internalised nature of rape culture that is pervasive in all societies. As a feminist living in one of the third-world countries about to land in the eye of fascism, ideologically, I have chanted the lines with them from this side of the screen. “El violador eres tú!” (“the rapist is you”)

I am immediately transported back to 132 villages in India where no girl child was born for three months earlier this year. Reports have pointed at a steady decline in the mortality rate of girl children due to poor reproductive health care facilities and unreported female foeticide. I am at a loss for an appropriate language of protest. The newly elected right-wing government serving its second term has nurtured the atmosphere of hatred growing towards the marginalised communities and womxn. They have launched anti-womxn campaigns under the pretense of being more womxn-centric while further alienating trans identified people with the passage of an ominous Transgender Persons Bill, widely criticised and rejected by trans rights activists. The ruling political party of India, Bharatiya Janata Party (BJP), has the highest number of MPs and MLAs with cases of crimes against womxn. That same government acquits perpetrators if they belong to upper caste and encounters alleged perpetrators in extra judicial killings if they belong to lower caste.

As a feminist living in India, I often wonder, what do womxn do in the countries that are entering a long era of fascism? What are feminists supposed to do when constitutional rights are being curbed? What did feminists in history do? During World War II, Freddie and Truus Oversteegen, two sisters, and their best friend Hannie Schaft lured Nazis into the woods to shoot them after. In another instance, Irish suffragist Mary Maloney followed Winston Churchill with a dinner bell for a week and rang it every time he attempted to speak. Or the story3 about musician Iqbal Bano when she wore a black saree to sing “Hum Dekhenge” (“And we shall see”) to a cheering crowd in Lahore in defiance of Pakistan’s dictator General Zia-Ul-Haq’s ban on the sari. They are whispering into my ear through their time lived in history and teaching me how to be: noli timere.

While professing his love for the invisibilised, emergent Marxist cultural theorist Raymond Williams asks us to be observant of the “structures of feelings” that arrive as the pre-conditions of the emergent in his essay “Dominant, Residual and Emergent,” the “pre-emergence, active and pressing but not yet fully articulated.” In search for the “not yet fully articulated” feminist vocabularies of contemporary times, one arrives at the viscerality of expressions, the not-yet-knowns, those glorious, beaming truths yet to be recognised. Re-imagining justice is as much a work of the law maker as it is that of a poet, it is as much the work of the banner maker as it is of the orator, it is as much for the ones who cook meals for everyone attending political meetings as it is for the ones who conduct those meetings. Feminist revolution is as much of the kitchen’s as it is of the factory’s and everything in-between. In fact, in feminist revolution the hierarchy between kitchen and factory dissolves and starts with revolutionising our everyday. Focusing on the banal includes observing our banality and everything that makes the banal. Our behaviour towards each other, language we use, jokes we crack, comments we make. Everything. Everything of everyday. If womxn start making their own meaning rather than bearing meaning for someone else, then we will successfully be able to defeat the male gaze. In cinema, in art, in life. Revolution will have arrived.

Ever since the #MeToo movement was widely criticised and accepted by the upper middle classes of the Indian society, concerns about who can and can’t complaint emerged. The status of the complainant is a point of concern. If a womxn lacks social and cultural capital, will her narrative be heard, let alone believed? Are we ready for the hitherto invisibilised womxn to emerge to tell their stories? Womxn who have fallen out of the narrative due to a lack of cis-privilege, due to lack of caste and class privilege, unarmed by psychosocial and other disabilities yet unabashed while speaking their truth to power? Are we ready for them to arrive yet? Are we ready for the feminist killjoys to radicalise our dinner tables?

But I was consigned to living; and I remained unrealised until my century and so I am, seen only from the outside, submerged.
- Rahel Levin, a 17th century German Romantic poet, wrote about herself.4