Kholood Salam is an academic and researcher in the field of new media, she is a doctoral student at the Faculty of Information at the University of Baghdad and an instructor at the Department of Information at the Farabi University College. She is interested in electronic media research and the influence of modern technologies in Iraqi society in general and amongst youth in particular. Her research interests include women and peaceful coexistence in Iraqi society. She is active in Iraqi political affairs through her participation in consecutive protests that the Iraqi people do against the Iraqi government since 2003 until now. She has experiences in journalism writing in political and social affairs since 2004 until now on different platforms some of which are electronic and some printed, and through her Facebook profile. In addition to personal experiences in making visual content, such as films and reports about various humanitarian, social, and political issues, and through supervising student work and participating in student festivals held at media universities in Baghdad. She has academic research contributions to conferences, workshops, and seminars related to women’s media, new media, and digital media education in Iraq, Lebanon, and Turkey, in addition to participating in social, charitable, and academic activities through her work at Al-Farabi University College and her membership in the Arab Federation for Electronic Media, the Media Test Center, and the Pulse of Life volunteer team, and through personal endeavors. She is also contributing to the recent protests in Iraq (independently) with logistical support and by going to protest.

As the year is coming to an end, the uprising and protests led by youth have signalled a potential shift in the stereotypical structure of the economic classification in Iraq. This economic order that takes historical root in Iraqi society was intensified after the invasion of Iraq and the war. Fed by the sectarian violence that spread through the streets, this order has grown wider and stiffer as an inevitable formation of a caste system that would haunt Iraqi society for decades. Consequently, the protests bore the brunt of that conflict, and although young people did not participate in it directly, they grew as part of a socio-economic fabric that differentiated among people based on class and social status. Their protests, therefore, centered around facing, countering, and undoing this potential caste system caused by government officials and powered by their parties. Protestors used slogans like “we want a country” and “I came down to take my rights,” reclaiming not only a country in its geographical understanding, but a system that was corrupted by decades of war and class discrimination. Yet, while the ruling class is attempting to undermine the potential revolution using all their resources and power, the lower and working classes are upholding it by acting as its core and machinery, standing day after day in the streets, and ensuring the revolution is kept alive. Case in point, the “Toktok” drivers are the engine of the Iraqi revolution: not only have they proved to be “the” phenomenon of the current strike, they have also come to represent the face of the new proletariat. Their “toktok,” a three-wheeled motorcycle used as cheap transportation in the public hoods, is illegal in the main areas of Baghdad. In other words, their labor is delimited by class lines within the geography of the city itself. 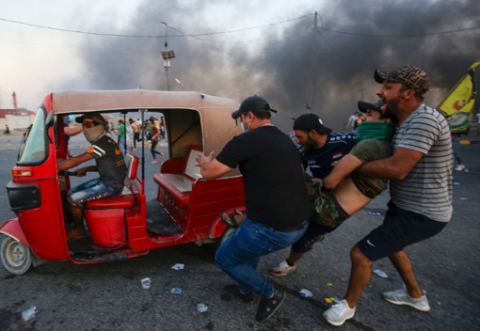 Having participated in most of the recent protests in Iraq, I believe the recent movements can be called a revolution, if only for their spontaneity and youth leadership. More importantly, it is changing the landscape of economic boundaries, and the perceptions of the working class, and in the case of this piece, the “Toktok” drivers. 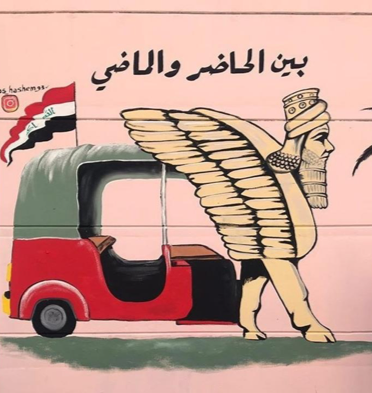 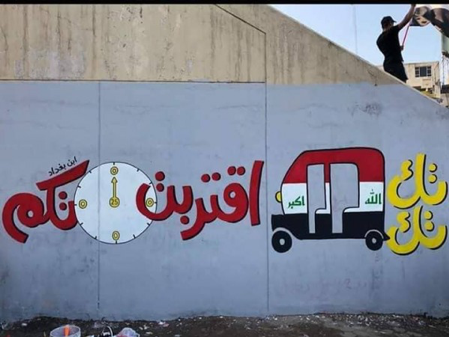 "Toktok” drivers are some of the most stigmatized populations in Baghdad. Their “illegality” in gentrified neighborhoods makes them “illegal” as a class in the eye of the "upper class". Consequently, class discrimination is masked by stereotypes that decry their driving habits and behavior deemed “spiteful” and inappropriate in the streets. The politics of respectability were also at work to depict them as the result of a damaged society and the facet of a lawless city, and they were blamed for car accidents and hostile incidents that happened around the city. It is worth noting that most “Toktok” drivers are mostly underage teenagers from the poorest districts of Baghdad, such as Al-Sadr city. Working as an inexpensive transportation alternative, they are, therefore, brought into a caste system and treated as cheap, demonized labor. Residents of the surrounding areas, myself included, found it hard to deal with those drivers and their chaotic driving. With the revolution, I reflected on and acknowledged my own bias and privilege, a reflection that was prompted by the role “Toktok” drivers undertook in the protests. Acting as transportation infrastructure for the revolution, they took it upon themselves to drive both protestors and supplies to the protest areas, free of charge. Soon, they became the only viable transportation facility from and to Al-Tahrir square, and worked day and night tirelessly. From free drivers, they also became cleaners, ambulances, protectors, and protestors themselves. Indeed, they were finally recognized as part of the revolution, instead of being associated with the stigma that accompanies residents of popular neighborhoods. Before the revolution, if you asked any woman in Baghdad if she would get into a toktok, she would consider it a joke. Women in Al-Tahrir square now sing, “abu al-toktok ‘alam,” or, “the Toktok driver is superb.” 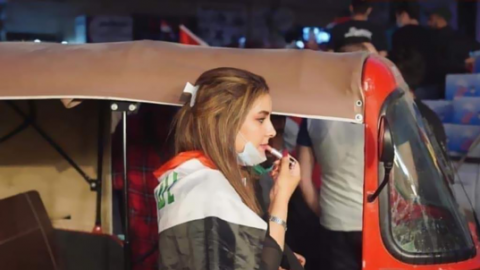 The “Toktok” teenagers became agents of change rather than the perceived consequence of war, and with that drastic shift, society changed its perception, to the extent of glorifying them. Songs and paintings idolize the drivers in Al-Tahrir square. The protests even named their newspaper (edited and published by volunteering protestors) "تكتك" Toktok. The image of the hero comes with its own problematics, and rather than exceptionalizing them, “Toktok” drivers need to be considered both a part of the social fabric and equals in the revolution. However, with the general feeling of unity in the streets, it is undeniable that preconceived ideas and stereotypes are being chipped at with the momentous events. Not only are sectarian boundaries being challenged, but so are those of social class, to the extent that sectarian and class differences cannot be perceived as distinct; together, they form a fence that protects the interest of the ruling class. With socio-economic and religious differences finally losing their impact in the eyes of many Iraqi people, this fence is the barrier that is expected to drop.